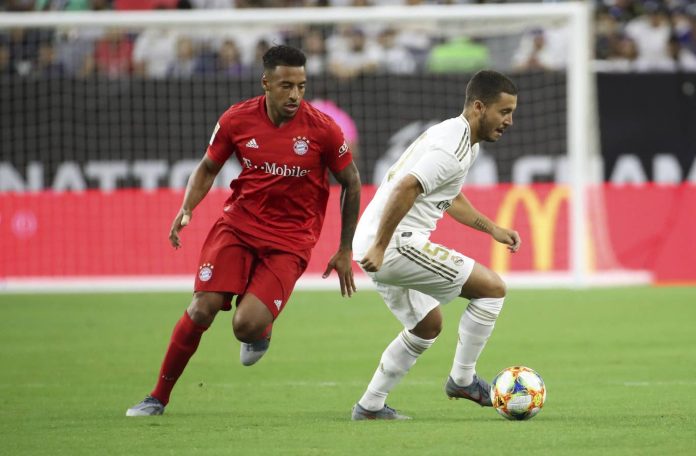 
Corentin Tolisso opened the scoring after 15 minutes, while 11 changes from Zinedine Zidane at half-time saw Real lose their rhythm after the break.
Despite Bayern Munich’s 3-1 defeat of Real Madrid in its 2019 International Champions Cup friendly, the Summer of Eden Hazard continued.

It’s real: Eden Hazard is in action in a Real Madrid kit.


However, Bayern was able to do what Hazard—or any of the Los Blancos—did not for the majority of the contest: score.

Corentin Tolisso opened the scoring in the 15th minute. The Frenchman buried his own rebound, as his initial shot ricocheted off of goalkeeper Thibaut Courtois.

Bayern may have been unable to keep the clean sheet, but it showed much better form than in its 2-1 loss to Arsenal Wednesday night.

The German club will next take on AC Milan in an ICC matchup Tuesday night at Children’s Mercy Park in Kansas City, Kansas.
Meanwhile, Madrid will look to secure its first win—and Hazard, his first goal—of the summer against Arsenal Tuesday evening at Washington D.C.’s FedEx Field.