IPL royal challengers bangalore team 2017 tickets booking details is placed here. The Royal Challengers Bangalore team have always been one of the glamorous sides to look out for. They have some of the world’s top T20 players.

The Royal Challengers Bangalore (often abbreviated as RCB) are a franchise cricket team based in Bangalore, Karnataka, that plays in the Indian Premier League (IPL). One of the original eight teams in the IPL, the team has made three final appearances in the IPL, losing all of them (in 2009 to the Deccan Chargers, in 2011 to the Chennai Super Kings and in 2016 to the Sunrisers Hyderabad). The team also finished runners-up in the 2011 CLT20.

The home ground of the Royal Challengers is the M. Chinnaswamy Stadium in Bangalore.

The home ground of the Royal Challengers is the M. Chinnaswamy Stadium in Bangalore. The team is currently captained by Virat Kohli and coached by Daniel Vettori.

Indian Premier League is a cricket tournament organised by the Board of Control for Cricket in India (BCCI) and backed by the International Cricket Council (ICC). For the inaugural tournament held in April–June 2008, the BCCI had finalised a list of 8 teams who will be participating in the tournament. The teams representing 8 different cities of India, including Bangalore, were put up on auction in Mumbai on 20 February 2008 and the Bangalore team was owned by Vijay Mallya, who paid US$111.6 million for it. This was the second highest bid for a team in the IPL, next only to Reliance Industries Ltd.’s bid of $111.9 million for the Mumbai Indians team. 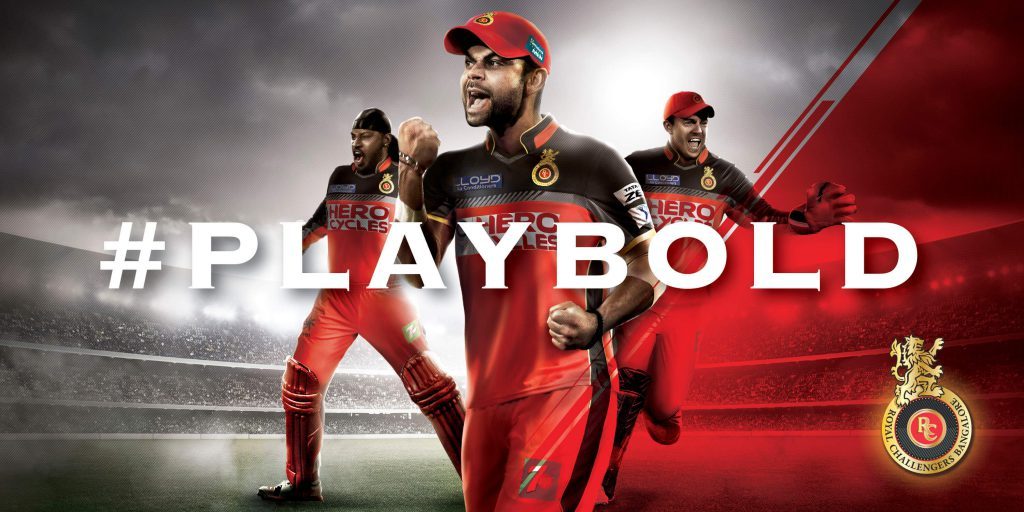 Last edition of the Indian Premier League was undoubtedly the most thrilling one – a success where they remained to be one of the key teams to entertain the fans. In fact, their charismatic performance earned the respect of many fans from other teams too.

Just like every other year, Chris Gayle was the star factor for the fans to flock to the stadiums, but last year, it was Virat Kohli and AB de Villiers who proved to be sensational. Between them, the duo have scored more 1500 runs, comprising of 69 sixes and 171 fours. With this kind of an action, one can only find it hard to not go to the stadium with the hopes of catching the boundary ball.

Interestingly, it wasn’t only the heavy batting which took the team to new heights, but also their will to fight hard. At one point in the tournament, they needed to win every single match in their hand to reach the playoffs from the bottom two of the table. Led by Kohli, the Challengers won four games back to back in the final stages of the league, and secured a second place finish in the table.

In the playoffs, they defeated Gujarat Lions by four wickets, at home. The stage for the final was set, as they played Sunrisers Hyderabad at home itself. With crowd supporting them, it was certainly heartbreaking for the Challengers to lose the title by just eight runs. But one thing which they certainly won were the hearts of the millions of fans in the country and across the world.

The Kohli – de Villiers pair is something which the fans will eagerly wait for next season. There is no telling when the records will be broken, and new ones will be made by the side. So make sure you try to catch the action live in the stadium, as we bring you the latest on the ticketing front.

The home ground for the franchise in Bengaluru is the M. Chinnaswamy Stadium that can seat a total of 36,760 fans when full. Indian number three batsman, Virat Kohli is their captain while they are coached by Kiwi spin legend, Daniel Vettori.

They have one of the most feared batting line ups. Given the line-up that they had, it was sure that they would retain Virat Kohli, Chris Gayle and AB de Villiers. These three can take the game away from any team in a span of five overs. Gayle has a class of his own when it comes to T20. He carries the team on his bat almost demonically and blazes them to glory. It is funny how minuscule he makes the likes of De Villiers and Kohli appear.

Kohli is known to be an aggressive captain and if he can manage to get his players pumped up for the games, we could see them pushing for a top spot. They are a team that is very difficult to beat at home and they will be hoping to do well on their travels.

With bowling being their main concern to solve from the previous year, they’ve already made amends to by spending big in the recently concluded auction. They managed to get the costliest player in this year’s IPL, by spending a whooping 12 crores on the English pacer Tymal Mills.

He has quite a bit of experience from playing in domestic T20 leagues across the globe, making him a valuable bowler to have in the side. Apart from him, the Reds also invested quite a bit in Pawan Negi too, who was the costliest buy in last year’s IPL. Being a spinner and a lower order batsman, he is a good addition to the team. On a turning pitch, he has the ability to trouble the opposing batsmen and this is something which is sure to come in handy as the tournament progresses.

Where things will get interesting is for Bangalore to choose their four foreign players given their foreign contingent is so strong. We could however be sure that Watson, Gayle and de Villiers will feature in every game unless they miss out due to injury.

Royal Challengers Bangalore are one of those sides who have always looked good throughout all seasons – except in the first edition – but never gone on to win the title. That is a bit of a surprise because they not only have an excellent set of batsmen and bowlers but also have a tremendous fan following supporting their team. They will definitely look to win the tournament this year.

Interestingly, given the kind of support the  Royal Challengers Bangalore team side usually has from all around the country, there are many cricket fans who look to watch their games in other cities. So don’t miss your chance to buy ipl Bangalore tickets online now. RCB ipl tickets online details is placed above.